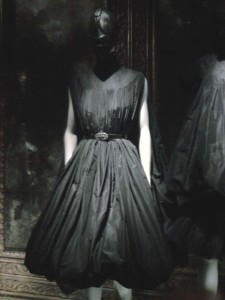 There aren’t enough adjectives for me to describe how much I love New York City … there just aren’t. This weekend made me feel like ME again, and I don’t think too many places could do that … but I digress. There have been numerous tweets, articles and Facebook posts from fashion journalists describing their experience at the McQueen exhibit at the MET, so I thought little ol’ me would share my story.

I waited outside the building, in the heat, for what I want to say was a little over an hour, which wasn’t bad because it was beautiful out and there were street vendors selling some pretty great artwork. I had also never been to the MET so just the sheer magnitude of the building was mystifying to stand next to. So when I made it inside the building under two hours, I was secretly saying to myself, “what were those fools at NYMag.com complaining about.” Did anyone ever tell you karma is a bitch, because it is.

I paid my donation, which was a dollar … judge all you want, and got directed to another line with a sign in front of it that said, “Wait Time For McQueen: Savage Beauty, 3 hours.” So, CLEARLY they were just being silly, right? Please dear God just be kidding. Turns out the MET can do a lot of things, but joke is not one of them.

What happened to me within the 3 hour waiting in line span:

And When I Made It To The Promise Land:
I’m not going to go on and on because words do not do this thing justice. It was SO worth the 4 hour wait and SO worth the pain and agony. I walked out of that exhibit at peace and almost like a soldier returning from fashion war. It was glorious. It was genius and it was EVERYTHING I love about the fashion industry.
Thank you to The Costume Institute, Andrew Bolton, the curator and genius and everyone else involved in producing such a mind-blowing exhibition of work.
And most of all, rest in peace Alexander McQueen.
Ps. The picture above was the only one I got to take, and I literally felt like James Bond doing it because all the guards were evil and bitching about NO PHOTOGRAPHY. Really dude? Nothing else in life exists like this and you expect me not to document? Cue Bond music and me taking a sneaky picture. MWAHAHA.

One thought on ““I Want To Empower Women. I Want People To Be Scared Of The Women I Dress” -Alexander McQueen: Savage Beauty”