All of those hours I wasted in college watching Rock of Love marathons seasons 1 and 2 … and I can’t quite remember if there was a season 3, but if there was I most definitely watched it. Having to witness him mack it with all of those broads and thinking to myself, I wouldn’t go near that man with a 10 foot pole because he probably is infested with a new form of an STD that no one has yet to hear of.

And now years later, I not only received a chance to attend a Bret Michaels concert in sweet seats tomorrow, but also meet him. How could you POSSIBLY turn down an opportunity like that?! The only other rock star I met was the lame Backstreet Boy. He was at my local salon promoting his organization for some disease and the whole meet and greet was very anti-climatic. I walked over to him, he tried to act super cool, and I think I just nodded and said, “what’s up?” And that was that.

Now, Bret Michaels is a different caliber of celeb to meet. First of all he was once an 80’s hair band rock god (I was in diapers when this all went down, but I’ve watch my Behind the Music … I know my shit). He is a Rock of Love iconic and I do believe a Celebrity Apprentice success, correct? So I can’t help but be a little perplexed as to what to wear to this concert. Can’t go hipster chic, can’t go Chanel chic, can’t go corporate (not that I ever do), can’t go video ho chic (or actually you probably could). So my question is, what the hell do you wear to a Bret Michaels concert?! 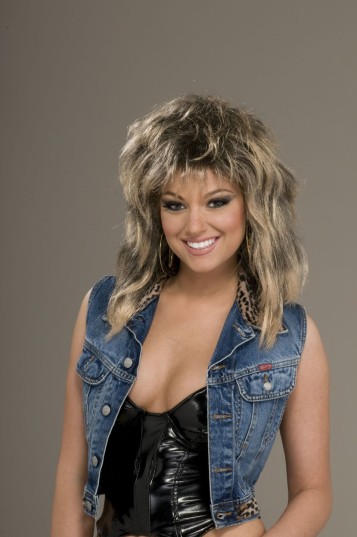 I did a simple Google search as to what “80’s hair band groupies” looked like back in the day … and I believe the woman to the left is exactly what I’m imaging for what you need to wear to a Bret Michaels concert:

1. Big, wild and preferably colorful hair. Get those extensions, frosted tips, pink streaks … make “the do” a little cray-cray

2. Jeans, jeans, jeans. Jean vest, jean jacket with your initials bedazzled into them, tight blue jeans, even tighter skinny jeans, jean bras … the 9’s. Anything jean material that is tight is a winner.

4. Leathah … not leather … leathah. Rock God’s need leather like fish need water to swim. It is the key to their heart.

Literally, the fact that I had to name those top 5 things above made me vom a little bit. Dear God. I know the whole saying “when in Rome,” but when at a Bret Michaels concert I will probably dress like myself … and maybe rock a bandana just for funsies. Gotta play the part somehow.

I’m all about having experiences and seeing/trying/doing new things … and tomorrow, this whole meeting Bret Michaels thing will be one for the books. Now excuse me, I need to finish listening to my “Best hits of Poison” CD and crafting my perfect “Rock of Love” joke I plan on telling the man tomorrow.