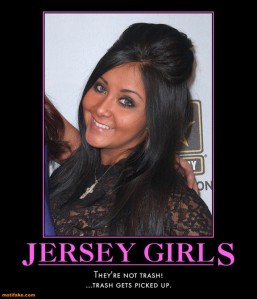 I was watching TV the other night and a preview came on for the new CBS show “Made in Jersey.” Intrigued, I sat there and watched this portrayal of a typical “Jersey girl” unfold in front of me. Bigger hair, loud mouth, not afraid to get in front of someone’s face, thick New York-ish accent, Italian (I assume), makes points and comes to conclusions based on things like her sister is a manicurist, hair poof … even more ridiculously stereotypical and loud Italian (I assume) family. I mean for the love of God. Really? Again?

Let me say, I was born and raised in New Jersey. South Jersey … less than a half and hour away from Philly. I now find myself clinging to the fact that I live less than a half hour away from Philly due to things like the Jersey Shore. Now the minute Jersey rolls of my tongue, I am being bombarded with questions like, “do you fist pump?” “why aren’t you tan?” “do you go to Seaside Heights and hang out at Karma?” Then my head explodes.

What I am saying is this stereotype of the typical “Jersey girl” isn’t fair to us all. Jersey as a state sucks and already is known across the country as “the arm pit of America,” but now having to defend myself and answer all of these inane questions is exhausting and overall … irritating. Not only are we viewed as idiotically tan fist pumpers who like to get drunk and make out with “guerilla juice heads” at bars, but now we have this show depicting this clueless, big haired girl trying to make it in a big fancy city law firm. If you took away the stereotype from the show and made it just a normal girl from Jersey trying to make it in a big city law firm, maybe … just maybe I would give it a shot. But no CBS, you had to take it to Snooki-ville. She legit is J.Wow with a law degree and a suit.

This character seems like a smart girl, yet says things like, “a law degree and I still end up doing makeovers in the bathroom.” Christ. And then gets a star tattoo on her hip bone and makes a statement like, “I’m tougher than I look.” My GOD. Let me set the record straight, some Jersey girls may act like this … and there is NOTHING wrong with that … at all. Some Jersey girls are proud of this as a matter of fact, I know some of them. What is wrong with it is that it has turned into this awful stereotype that makes producers think it would make a hit show. Wrong. Instead you are just making it harder for ACTUAL “Jersey girls” to claim they are from Jersey without people laughing, rolling their eyes, or making an awful “ew” face.

Am I proud to be a Jersey girl? Absolutely not. I don’t have a New York accent, I don’t fist pump, I don’t enjoy “guerilla juice heads,” I don’t rock big hair or a poof, I’m not a bad ass loud mouth bitch, I’ve never gotten in a fight in my LIFE, I eat hoagies … not subs, I don’t explain to people where I live in Jersey by what turnpike exit I’m off of, and I don’t enjoy neon colors or shirts with catch phrases on them. I’m just me. So where does that leave me? Yes … I am a Jersey girl, but I just don’t fit the awful stereotype people have conjured up for it … instead I cling to Philadelphia for dear sweet life.

So CBS, I will not support this show … not up in here. Guess what? Until people realize there are OTHER types of Jersey girls … I refuse to partake in anything having to do with this persona Hollywood and elsewhere have labeled as who we are. To all the girls out there who are proud to be from Jersey and rock the stereotype … I commend you and please do not take offense to anything I am saying. This is coming from a girl who doesn’t fit in with her state, yet technically can’t claim a city she lives a mere 20 some minutes from as her own. :::Sigh::: I was made in Jersey, but that is about it.

Down with the Jersey girl stereotype. We are much more than that.

2 thoughts on “My Theory On Being Made In New Jersey”

A revolution has many lanes ♥️✌🏻
For a while I haven’t known what to say. Didn’t know how to say it. Didn’t want to offend or say the wrong thing. But saying nothing is just as bad as doing nothing. We have to stand up and support our friends, neighbors, coworkers, family, and strangers who are feeling the effects of straight up injustice. In a country that is supposed to be free and have equality for all. Actions speak louder than words, and in my opinion, one of the most important things we can ALL do is use our power to vote in November. We need change now more than ever. #blacklivesmatter ✊🏽✊🏿✊🏻✊✊🏼♥️
Casper the friendly quarantine ghost 👻
Socially distant ‘splorin’ with @douggie__t