I’m speechless. Literally. First thing you learn when you are, oh … I don’t know … able to comprehend that you are a human being walking on this earth, is that it is not okay to let your giggly bits hang out. Seriously. Don’t you remember the awkward and weird convo you had with your parents as a wee one that went a little something like, “no-no areas stay covered up, sweetie.” “No showing your butterfly on the playground,” and so on.

But I suppose when you become rich and famous, those little “private part talks” we had with our parental units go right out the window. Why? Because, why NOT! Duh! Seriously though, we are innocent bystanders that have been watching a battle called “who can push the limit the most.” Because of people like Janet Jackson and her infamous nip slip, Lil Kim letting one of her knockers hang free for Diana Ross to feel up, J. Lo and the “scandalous” Versace number, and countless other nip slip, side boob, ass crack and va-jay moments … CBS Standards and Practices committee now feels it is necessary to take the parental role and use the term, ” no bare fleshy,” in an email to all attendees of the Grammy’s.

My question is, do people REALLY need to be reminded of such things? Really? Because as accomplished adults … you should have a little common sense to know that private parts should not be exposed in public. You should also be aware of a thing called “taste” and “class.” Just because it’s only rock n’ roll, doesn’t give you the green light to dress like an absolutely hot mess hooker, especially when fantastic designers are probably begging you to wear their looks hot off the runway. Hmm … McQueen … or this slutty number from a no-name designer from West LA? Decisions … decisions.

Yet at the same time performers are so set on out-doing one another that … in reality … on-stage nudity is the next big “shocker.” Remember the good ol’ days when it was scandalous that Madonna rolled around on stage in a wedding dress to “Like a Virgin”? Now if Lady Gaga walked on stage butt ass naked I don’t even think I would blink an eye.

This leaves me wondering what is going to happen when Jennifer Lopez gets out of her limo in a dress with a slit going up her thigh. Is the principal of CBS going to come out with a ruler and expel her ass? I hope someone shows up with a tuxedo painted on their body. Now that would REALLY be stickin’ it to the man.

Oh, also (I almost forgot) … no product placement either, rock stars! Eff … guess I’m going to have to return my one-of-a-kind sequin dress with “SPAM” written across my knockers. Oh well :::sigh::: … there is always the Oscars.

And now … for my fav “scandalous” Grammy’s looks! 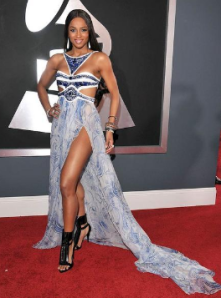 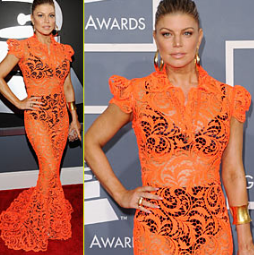