I’m not sure who thought it would be a good idea to let Hollywood experiment with punk fashion … but umm … yeah.

I desperately wanted Debbie Harry and Patti Smith to show up and like break shit and give everyone the finger and scream a lot and then leave … but alas it didn’t happen. Instead we had to watch starlets awkwardly play around with punk .. which, quite frankly, was painful.

I’m in no way, shape or form “punk” … and I think it is an incredibly hard style to pull off … because punk wasn’t about the style. It just happened … the music made it all come to life. It wasn’t because a stylist said … “ooh studs! SOOOOO punk.” It was because they literally didn’t give a shit. These people … live to give a shit. They get PAID to give a shit. Hence why it doesn’t work. And yes, the Met Gala is about experimenting with fashion, paying homage to it and living out a real life costume ball … but perhaps let’s pick a theme more obtainable.

For the following things do NOT count as paying homage to punk.

3. Feathered ball gowns … unless you murdered the bird before the Gala and stuck its feathers to your dress, then that counts.

4. Platinum blonde hair … perfectly styled … just for funsies … tee hee I like, always wanted to do it

6. Dramatic trains … unless an actual psycho path ripped up the material in the back … doesn’t count

8. Floral print … … … I will have nightmares about Kimye’s look though

10. Cut out dresses … too trendy, holmes

So I will leave you with this thought: Why wasn’t there more Alexander McQueen where there wasn’t Alexander McQueen. That guy is probably in the after life kicking and screaming like, “WHY AREN’T MY DRESSES REPRESENTED!!!!! PUNK! HELLO?!” 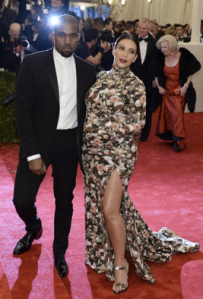