Okay, I could sit here and write about how my eyes burned whilst watching Miley Cyrus hump teddy bears, or how she single-handedly ruined “Blurred Lines” for me forever, or how I was so tired of seeing the MTV camera only pan to Taylor Swift and her stupid face … but no, I refuse.

What I WOULD like to say is, what the eff, MTV?! Seriously. Want to know why I felt like I was 100 watching this spectacle even though I’m only 26? Because you don’t play music videos anymore. Not even a little bit. Instead you make up shows about slack-jawed yokels who get engaged to the “love of their life” via the Internet (ps. how does one even do that nowadays with the death of chat rooms? Seriously, am I right?!) and need some “dreamy” hipster to help them figure out, WHOOPS … that 5’10 bikini model you thought you were engaged to is actually a balding 55-year-old man who is bi-sexual with a foot fetish. Oh and my new fav is the commercial I saw for the show about more slack-jawed yokels on the road to figuring out if they are related. RELATED. Umm … come again?

Can I just say from age 12 to maybe two years ago, I worshiped the VMAs. Wanna know why? Good performances, actual shocking moments (One word: Madonna), not just Miley Cyrus jiggling her “ass” awkwardly in the face of a married man, and videos I was actually rooting for. The amount of money that these artists … well … record labels spend on these videos for NO ONE to see them unless you happen to be bored one day and say, “hey self … wonder what Drake did for his new music video,” and pull up YouTube is not only a travesty … but ridiculous.

The only thing that saved the show last night was JT. And I’m not just saying that because I die for him or want to marry him secretly, but because the guy is pure talent. You can say you hate him all you want and talk all the shit you would like, but deep down you know I’m right and you are probably juuuuuust a little jealous. Come on … admit it.

Sigh … MTV, listen. You are a channel that people in their 30’s and 40’s look back on with fond memories. In fact, I’m in my 20’s and look back with a smile as I recall running home from high school to catch TRL because Britney Spears was going to be on or Mariah Carey was going to make a mid-breakdown special appearance. Now … do kids REALLY get excited about shows like Awkward? Catfish? The freaking CHALLENGE?! Hi … those people weren’t really young even when I was a teenager, and yet they are still doing all these stupid stunts to win $25 thou. Cool.

I’m going to sound like I’m wearing a Talbots cardigan buttoned up to my neck, holding my Chanel quilted handbag close to my chest as my reading glasses dangle around my neck from a set of pearls (which I’m not … I’m actually pretty liberal) but … I’m really frightened for our youth. All I’m saying is, maybe, just maybe, stop trying to push the limits and maybe focus on setting an example for kids … show them art, show them music, show them expression. Don’t just teach them that one day, if you act a fool, you can be a reality star, too. And if not, well, those record labels should take the money they would spend on a fancy video and give it to a better place … like music/art programs for kids. Just sayin’ … because I really don’t want to be in my 30’s and 40’s shaking my fist at a bunch of 20-somethings just showing off that they are “adults yo” by twerking in an ill-fitting onesie with their tongues sticking out. Just sayin’ … 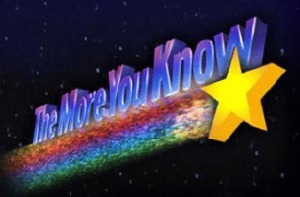