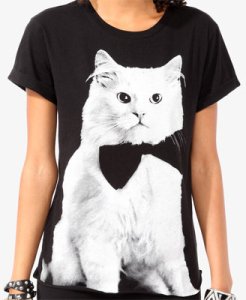 No not really … but side note, I totally got a VHS tape of CATS! The Musical for Christmas one year, and totes watched it more than once … which is probably too many times. Memory … all alone in the moonli … alright, I’ll stop.

Back in the day, you know, when I was in elementary school, it was cool to like cats. It was also cool to eat glue, hate boys, and wear 15 different colors of neon at once, but I digress. I definitely owned a few Lisa Frank trapper keepers with some cats mixed in with unicorns and puppies, along with a few cat pencils, and maybe even an embroidered cat sweatshirt. I mean who didn’t? To be clear, I wasn’t obsessed with my cat, these are just the things offered to children to wear and use in the 90’s, and my mom indulged.

And then once middle school and high school hit, cats became uncool. I was lucky it I petted my cat once a week. I suppose I was too caught up in useless drama and learning the moves to Britney Spears’ new music video. Even in college I remember making a pact with my roommate to intervene if either of us showed signs of becoming cat ladies.

But now … in 2013 … the amount of cat swag that people are actually buying AND wearing astonishes me. I would have gotten my ass beat in high school (and by beat I mean the rich mean girls would have totes made fun of me behind my back and spread rumors around that I was a cat lady and my house was covered in litter instead of rugs) if I rocked a sweatshirt from Forever 21 that said CAT in big bold letters.

Alas it is the cool thing to do … to be obsessed with cats. Hipsters who once flocked to fedoras and ball smothering skinny jeans, are now flocking to cats. I really hope animal orphanages all over the country are feeling the positive effect of this movement. I mean hell … even I just adopted a baby cat back in August and have become obsessed with her to the point where I talk about her and photograph her like it were my child. If you follow me on Instagram (which is should), you will understand this. By the way her name is Ellsworth (after Ellsworth Kelly … one of my favorite painters) and I just bought her a sparkly red collar for Christmas … eeeee!

Maybe it is because once closeted cat people feel free to come out and say, “Yes. world! I own a cat … and love it … and his name is Mr. Whiskers … and I make him wear a bow tie!” And one thing people who love cats more than cats … is OTHER people who love cats. Trust. It is the thing to connect with in your late 20’s or 30’s when you don’t have children.

But I just don’t know if I need to express my love for my cat via my fashion choices. My fear is that years from now I will look back and shake my head in shame, much like how I view my Lisa Frank cat trapper keeper and VHS tape of CATS! The musical. Yes, a lot of these cat-inspired items are adorable … and hey some are actually chic … but I have a feeling this “cat lady couture” just won’t last forever, I don’t care if all of it is in black and white. One day, being called a “Cat Lady” will actually go back to meaning you own 15 plus cats, don’t brush your hair, and will be single for the rest of your time on Earth. 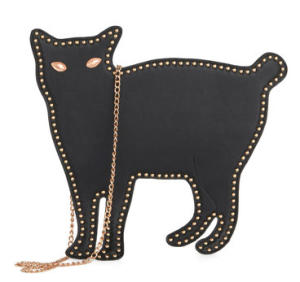 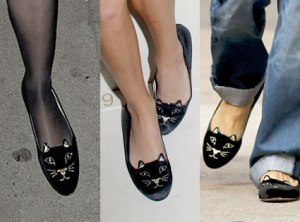