Remember that girl in high school, the one you wanted to accidentally throw a banana peel down in front of where she was walking so she could slip and break her face … just a little? You know who I’m talking about … every girl had to deal with that girl in high school … and if you didn’t … well … you were probably that girl. Good for you.

And did you know … Gwyneth Paltrow was recently named People Magazine’s “World’s Most Beautiful Woman” GASP! And honestly, the haterade that has been pouring out of everyone because of this is absolutely classic. So yeah … looks like she has set the beauty standard in the whole entire world. :::Sigh::: Great. I mean for f*&ks sake … come on People Magazine. Like we don’t have any other shit to stress about, now we have to set our beauty standards to Paltrow? Really!?

But this got me thinking about the chick you wanted to banana peel in high school. Here are the qualities of that girl that made you secretly hate her, but at the same time crave her life compared to Gwyneth:

Gwyneth: Academically … I know she graduated from the Spence School in New York City … sounds fancy … I’m sure has a degree in being beautiful and awesome too

2. That girl: Had the hottest boyfriend in high school

Gwyneth: Umm let’s go through her laundry list of ex-boyfriends, shall we? Brad Pitt, Ben Affleck … and now married to one of the sexiest rockers of our time, Chris Martin … ummm hello?! The Coldplay song “Green Eyes” is about her … I mean …

3. That girl: Was beloved by everyone (even the teacher’s spawned from Satan himself)

Gwyneth: She seems sweet as pie … I mean if Oprah lives and dies for you, shouldn’t we all? I can’t really see Paltrow smacking a bitch, but I could be wrong. Overall I would say she is pretty likable.

Gwyneth: The woman lives a yogi lifestyle. And that is why she is 40 and looks younger than me … I’m 26 by the way … cool. Also … doesn’t eat carbs … nor does she allow her family too. Sweet, Paltrow, how is that working out for you? Oh that’s right, your the most beautiful person ever … my bad.

5. That girl: Gorg … like stunning … made inanimate objects weep over her beauty

Gwyneth: Flawlessly gorgeous. Doesn’t fiddle with Botox or plastic surgery, just straight up naturally stunning. Excuse me while I go put on pounds of makeup so I don’t resemble death anymore.

6. That girl: Talented in every single thing she tried … like I’m talking could randomly hop on a pogo stick for the first time and become the world’s best pogo stick jumper

Gwyneth: Oh you know gave acting a whirl, won an Oscar. Gave modeling a whirl, ended up on the cover on Vogue. Dabbled in singing and did a freaking duet with Cee Lo and the Muppets on the Grammy’s. Then got into blogging because … why not take the spotlight away from actual bloggers who are trying to make a name for themselves :::shaking fist:::. Then decided to write a cookbook … I mean the list goes on and on.

7. That girl: Helped cure AIDS/feed the hungry/raised money for orphans … AKA made us all look really bad

Gwyneth: I mean she raises money for breast cancer research, is apart of UNICEF, donates to food banks, sells her own clothing on her blog to raise money … but when you are rolling in it like she is, she better damn straight help out charities.

Gwyneth: She could wear a paper bag and make it look chic. ‘Nough said.

9. That girl: Had more friends than she knew what to do with … people would just flock to her

Gwyneth: She knows Oprah and does yoga with Madonna … ‘Nough said. And quite frankly if she was in my general area … like I could touch her, I would totally kiss her ass and try to be her friend … “Oh your hair is SO pretty,” “OMG RIGHT?!” … that is how I imagine that conversation would go.

10. That girl: Lived a luxurious life with a plush home and cars that were more expensive than my parents combined salary.

Gwyneth: Do I even need to go there? She has homes on two continents … let’s talk.

So listen, let’s be real here ladies, the reason everyone is up in arms about Gwyneth Paltrow winning “Most Beautiful Woman That Ever Walked This Earth,” is because we are straight up J-E-A-L-O-U-S. I’ll admit it, I hate the bitch for no reason besides the fact that I wish she would stop blogging and divorce Chris Martin so I could have him … but God dammit do I respect her.

And now … I will leave you with this: 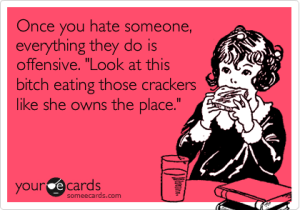