I’m a freak among women when it comes to bra wearing. While some may count down the hours of the day they can bust open their front door, unclasp their bra and pull it through their shirt arm hole (it’s a talent). Me? Well … I sleep in the thing. I don’t even let myself air dry after the shower. It is dry off, and bra on.

I wear it when I’m sick. I wear it when I’m just laying around the house. I’m basically 100% bra-ed up. Because without it, I feel strange. Like REALLY strange. Which is interesting because I remember thinking the minute I put one on for the first time, “this is so weird, Mom how long do I have to wear this thing?!”

I’ve even avoided backless dresses/shirts (which are my favorite … I adore my back) for this reason because “free-ballin'” was never an option for me, as, well … God gave me parts that need some :::cough::: support (that’s a nice way of saying I have big taas). Yes, I tried the backless bra, but you know that feeling of falling when you aren’t really falling? It’s basically the same thing, except you’re constantly thinking your bra is going to come flying off since it is hanging on to your skin by tape. Which is unnatural.

I can’t say I’ve ever gone out in public bra-less until recently. And guess what made me do it? Shocking … a strapless bra. I won’t name brand names as this specific brand was nice enough to send me a free trial of their bra … but I’ll honestly say the thing is made from the fabric of Satan. If I wasn’t throwing a party at my home that day, and if I hadn’t bought a halter maxi dress that required me to wear a strapless bra, I probably would have burned it.

Getting the thing on alone was a workout, and I almost injured myself pretty badly trying to shimmy it up. Lots of grunting was happening, maybe a few “F bombs” were dropped … I don’t know, I kind of blacked out.

After a really awkward and unsexy dance of getting my taas in said strapless bra, I was basically being smothered and stabbed from every angle (clearly it didn’t fit well, but when you don’t have any other options … because why would I own a plethora of strapless bras … you gotta work with what you have).

I was uncomfortable all day, walking around the party I was hosting making it look like I was pulling my dress up, but really I had the sides of my strapless bra in a death grip, trying desperately to slide it up even a centimeter so it would stop stabbing me.

I was a trooper. I wore the thing all day. All. Damn. Day. In fact when people would ask me, “GASP … Kate are you wearing a strapless bra!?” I would say, “yes and LIFE SUCKS IN IT :::shameless self promotion, fist to chin, wink … and walk away cursing under my breath:::

But we all hit a wall eventually. It happened to me right at the end of the party. I may or may not have had a couple of cocktails (I was drunk), and I just HAD it. No one was around except for my sister, so after a few failed attempts at doing it myself, I had my sister unhook my strapless bra (because that is normal) when no one was looking. I ripped it off, threw it in the corner of my living room (that happened … in all seriousness) … and basked in the glory of my new found freedom. And okay, maybe ONE person was around. But I looked them dead in the eyes and said, “YOU SAW NOTHING!”

And that, my friends, was the first time I “free-balled” it (I’m sure that isn’t the right term and I’m sure my aunt is mortified reading this right now … Hi Aunt Pat). And I gotta say … it was GLORIOUS. How relaxing. How non-restrictive. How … satisfying! Although I did turn into a paranoid mess asking all of my female relatives for the remainder of the evening, “CAN YOU TELL I’M NOT WEARING A BRA!?!” They think I’m nuts in general for being so “supported” ALL of the time anyways.

Yeah … so strapless bras still fucking suck. Forever and always. But at least this extraordinary evil one made me step outside of my comfort zone and go a little au natural. But no … don’t get excited (or freaked out … either or) … I’m not about to strut around the streets bra-less in a tight tank top. Nope. Not up in here.

I like me some support … just not in the strapless form. 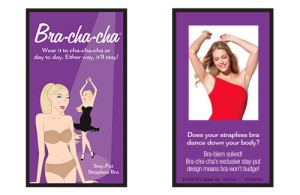 Strapless bras and myself have become known arch-enemies. Tom vs. Jerry, Dr. Evil vs. Austin Powers. Kate vs. Strapless Bras. We just don’t like each other … well, more like I don’t like them and they don’t give a shit because they are inanimate objects. It’s quite unfair, if you ask me.

And since launching my blog years ago, people have asked me why I loathe the garment so much. Why would I go to such extremes as to naming a website dedicated to my pure hatred of them? Well … number 1, we aren’t all about strapless bras here at Life Sucks In A Strapless Bra (read my About section for further explanation), and number 2, it basically comes down to:

1. They cut off circulation, yet still manage to fall down

2. They do nothing for knockers … of any shape or size

3. They never fit properly under clothing. Like Never. Never ever.

This massive feud I have brewing in my life has a silver lining to it, though. This feud … has proven to me that there is still good and genuine kindness out there in a world when sometimes it is hard to believe that people still care about one another. Yet people surprise me every day by suggesting shiny and new strapless bras to try out that may heal my negative feeling towards them. And as much as I appreciate these kind gestures, they just never end up swaying my opinion.

But my lovely friends over at SPANX were not okay with me feeling like this. They wanted me to lock eyes with a strapless bra from across a field of poppies, slow motion run towards it,  embrace it with open arms, and swing around in a pleasant little circle with it.

Enter the SPANX’s Bra Cha-Cha stage right. First of all, I’m a sucker for a product with a fantastic name … and this little number is a sassy bitch in the best way. Second of all, they call it the “stay-put strapless,” which trust me, when I saw this, I gave it one of my epic eye rolls accompanied with a, “psshhyeeeaahh right!”

I won’t give you a play-by-play of my entire experience wearing this bra. You don’t want hear about how I walked to the train and it didn’t fall down, or how I went for cocktails with Bra Cha-Cha and it didn’t fall down even more … or as SPANX refers to it as “jug tug,” which honestly, I mean can we get a slow clap for that.

I will explain it to you like so. My experience with the Bra Cha-Cha was much like …

Oh and totes this:

But let’s not forget this happened:

Disclaimer: I will not be changing the name of my blog. And I still hate strapless bras … except this one.