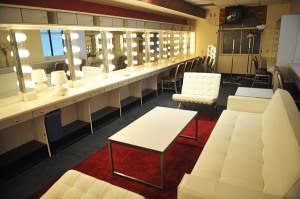 Sometimes I like to pretend that I’m really famous. Like this amazing fashion writer who is down to earth, yet totally recognizable and has to wear really obnoxiously huge sunglasses to avoid being bombarded by the throngs of fans. I mean doesn’t that happen to every fashion writer … hell a girl can dream.

I was listening to the radio today and they got on the topic of “riders.” You know those fun little wish lists, a.k.a. “get this for me bitch” lists that rock stars, movie stars and beyond request when making appearances backstage. They were talking about Nicki Minaj and how low-key hers was with like buckets of spicy fried chicken, apple juice, Desani water … simple things. It is actually really refreshing to see a star of that caliber have a rider that isn’t … you know, pretentious, because at the end of the day … you are still just an average person. Seriously. It’s shocking, but true.

Wasn’t it J.Lo that had to have an all white dressing room at a certain temperature with like rare white roses scattered about. Come … ON. Who in the name of Jesus Christ do you think you are? I mean I feel for those poor bastards that actually get these riders and have to fulfill all of these ridiculous requests. Probably because I assume it is some under paid intern running around with ridiculous stress levels losing hours off of their lives JUST so this bitch can hang out in this stupid pimped out room for like a whole hour. Lord. I sometimes feel like stars like that need to have some sort of authority figure to be like, “listen you, just because you were lucky enough to land in the lap of someone who could turn you into a star and mix your voice with auto-tune so you don’t sound like a jackass doesn’t mean you can treat people like shit and ask them to make the world stop turning. Word.”

Could you image being that famous, going into your dressing room, noticing the room isn’t the temperature you requested as you take five seconds to look up from your Blackberry and causing THAT much of a fuss? Ridiculousness. But it made me think … if I woke up and was like the creme dela creme of fashion writers, making super fabulous appearances and had to write a rider … what would be on it, especially since it seems like the sky is the limit.

Ahem, so yeah here is what I decided my rider would look like:

1. Disco ball in the center of the room

3. Water … sparkling preferably because I am a recovering Diet Coke addict and need the bubbles in my life

4. Lap top with Internet access (home girl has gots to blog on the go)

6. Candy and chocolate … Nerds, caramels, feel free to get creative

8. A super comfy couch with a super snuggle nook good for napping

9. iPhone charger, since I NEVER have mine

10. A bunch of really amazing food for all of the hard-working people who pulled all of this bullshit together that I requested

And there ya have it. Is all of that nonsense necessary? Nope. This is just fantasy land though … I’m pretty sure writers don’t get the hook up like that, and if they do then … where do I sign up.